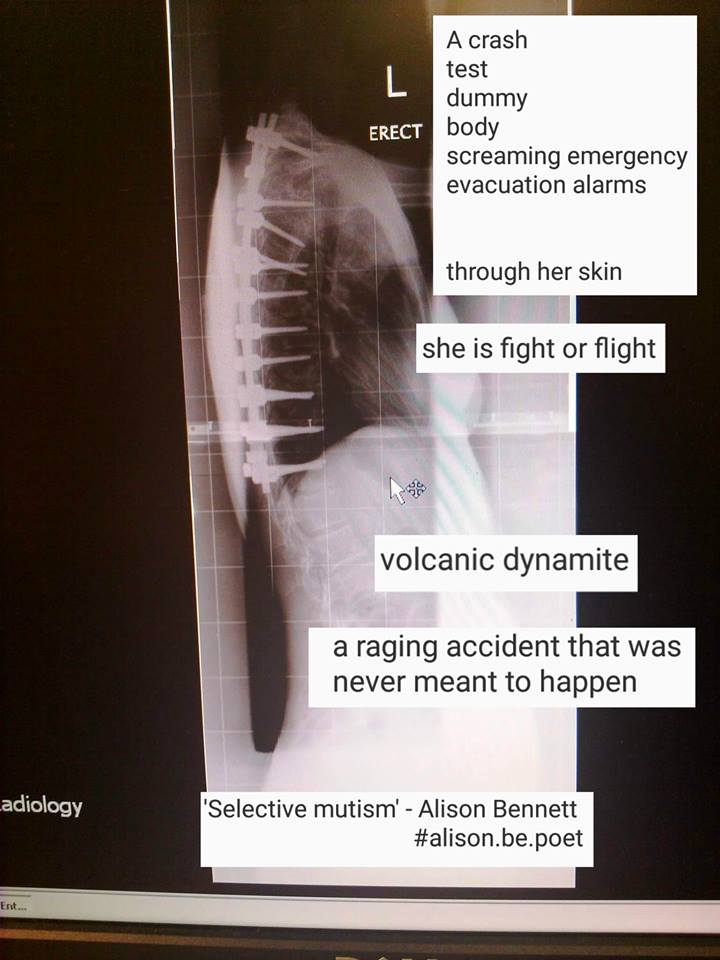 Eating Sweet and Sour Pork – on the fork until I’m full to the brim Spaghetti Bolognese – in a craze, I was lost in a maze for seven days
Chalam Masala – I like to go to Guatemala for a swim
Chicken Curry – in a hurry, that’s something funny
Seafood Paella – raining on my umbrella
Beef stir fry – that’s fried to cry
Eton Mess – not as healthy for whipped cream
Fruit Salad – I’m in a dream but it’s breezy
Big Breakfast –it’s my favourite thing
Crocodile meat – that I don’t eat. 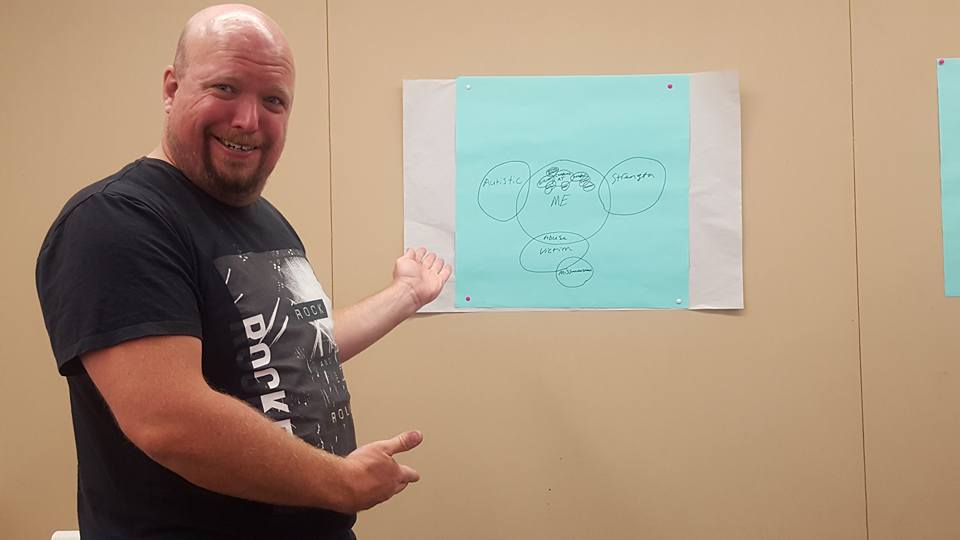 A synapsis flow,
A chemical neuron transmits
Slow it goes,
Thickens like blood in the arterial brain
Tracks on line, a slippery train,
A dysfunctional mind. 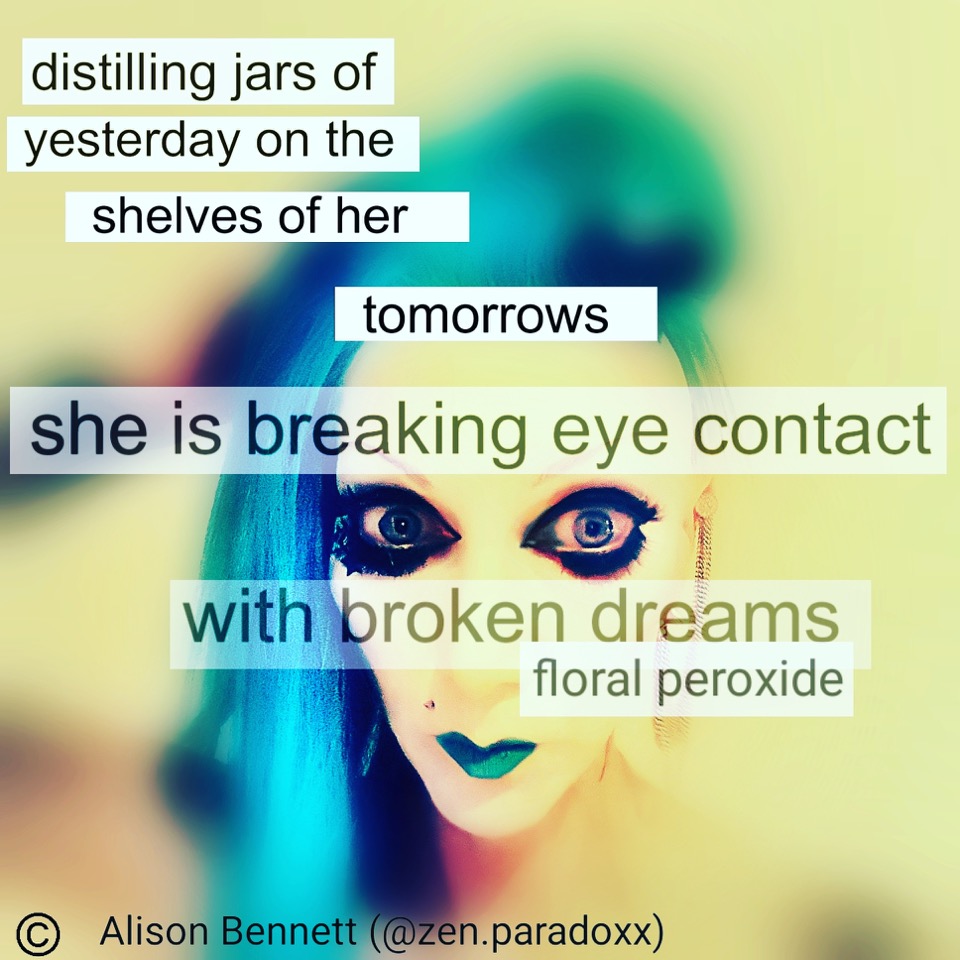 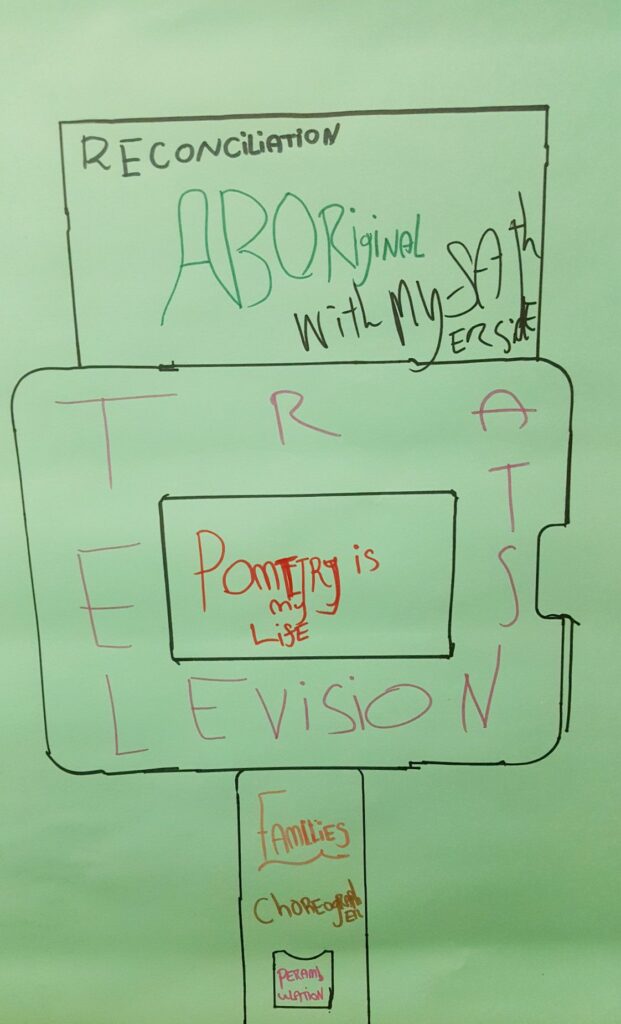 A bright red scream,
To undo the paths,
That were taken
Where the real me
Was denied, forgotten.
Eyes painted shut
Like a window,
So the red dust,
From bricks being crushed
Cannot dissolve into the air,
A signal for others to see,

A bright red scream,
To re-open me,
To let out arms,
To search for what was taken,
To feel for the shape of it,
In the low light,
Pools of water on the pavement,
Sediments at the bottom,
What is left of me,
Traces, unidentifiable, traces. That’s What She Said – Work in Progress

A bar, two friends sit at a small table with music playing a mild volume. They have beers in front of them and they are eating slices of prosciutto on single slices of bread.

Daniel: This is so good!

Xavier: Is it prosciutto?

Daniel: Yeah it is

Xavier: ……One day we’ll be sitting in Tuscany eating this

Xavier: No, it’s in Italy

Daniel: Well this is from Spain

Xavier: Is it prosciutto?

Daniel: I don’t know but it’s from Spain

Xavier: Well that’s prosciutto, but are you sure it’s not Italian, prosciutto’s an Italian word

Daniel: Well I don’t know about that but we had it all the time in Spain

Xavier: Ok well one day will be sitting in Tuscany eating Spanish ham.

Daniel looks around the room

Daniel: Man there are so many chicks here!

Xavier: Yeah not that it matters

Daniel: What do you mean?

Xavier: Well there’s nothing we can do about it

Daniel: That’s not true, you’ve just got to have confidence

Xavier: I think that just pisses chicks off.

Daniel: Not if they want it

Xavier: And how often is that the case?

Daniel: Occasionally, but most of the time they don’t know they want it until you show it to them.

Xavier: Yeah, I think that was Harvey Weinstein’s philosophy as well.

Daniel: What, well no you’re not flashing ‘em, you’re showing them charisma

Xavier: Yeah but I think that’s the same thing, thinking they want something when they don’t and putting on this bullshit façade that you thinks going to impress them.

Daniel: Well it does

Daniel: You’ve just got to take it slowly, we really do need to build some confidence up in you

Xavier: Yeah but confidence isn’t real, neither is charisma, they’re these things you put on and as soon as you walk up to a girl in a bar they know exactly what you’re doing! And it’s like you’re treating them like they’re idiots, because you think if show them that you want it they’re suddenly going to rip their clothes off and jump on your cock! When they’re probably just trying to have a drink like you.

All of this time they have been drinking their beers

Daniel: Why are you being so negative Xavier?

Xavier: I’m not being negative Daniel, I’m 41 years old and I don’t want to look like a total fuckwit another time in my life!

Xavier: He sees these two chicks at the end of the bar and they look like two friends having a normal conversation, and he keeps telling me to go up and say hello and I keep saying no and he keeps going on about confidence and he’s annoying the shit out of me!

Then finally he says if I go up and say hello and come back he’ll stop asking. So I go up and I do the whole “Hi I’m so sorry about this but my friend isn’t going to shut up until I came over here and said hello to you guys so can we pretend to talk for a few seconds and then I’ll go back”

And they’re like “Oh no worries we understand, just tell him we’re just here to have a catch up because we haven’t seen each other in ages because one of us has just had a kid”

I also see that they’ve got wedding rings on, so I go back say I said hello and told him what they said, and I tell him that they’re married and he says, “So what! A lot of people are married, it doesn’t mean they’re not open” And he just takes the fact that I’ve just been up there as an invitation to go straight up to them and start talking.

Daniel: Yeah, he takes it too far

Xavier: Yeah well, he just starts talking to them and he won’t leave them alone and I’m just constantly apologising in the background and they’re like “It’s okay, it’s okay, we know what it’s like.” And he even goes to the toilet and I go back down the bar where we were and I take his drink with me and thinking “he’ll just come to where his drink is” but he comes out of the toilet and walks straight up to them again, and I go back up there again trying to get him to come back with me and this goes on for about ten minutes, until finally they have to leave.

And about twenty minutes after that, he’s so drunk I have to carry him out.

Daniel: Carry him out!

Xavier: Well put one his arms over my shoulders and one of mine around his waist and help him walk out and then put him in a taxi.

Daniel: So that’s what sparked this tirade

Xavier: No, I just don’t know why I have to put up with this shit, after everything I’ve already been through, I grew up not knowing what was wrong with me then I find out I have Autism,

Daniel: Yeah, but I don’t reckon you look Autistic

They finish their beers Back to Writing Me

Other pieces from Writing Me