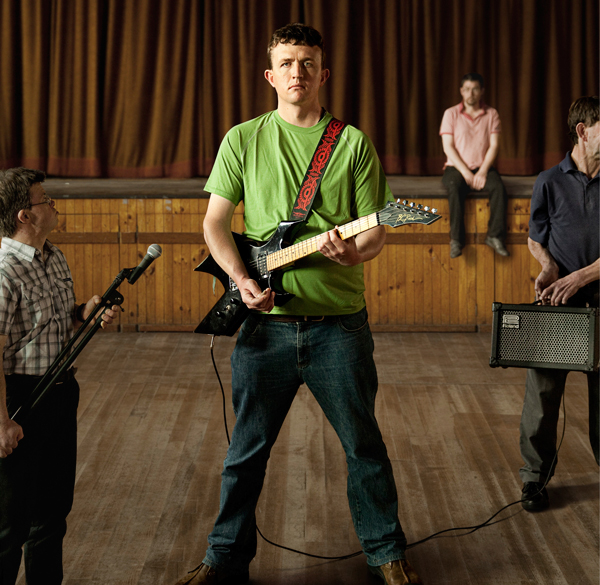 Recently I told colleagues how pleased I was that the first feature film Christopher Houghton made after our documentary SONS & mothers included an actor with down syndrome. She wasn’t playing a disabled person, far from it; she was just an ordinary waitress. I shouldn’t say ordinary, she did share her scene with Matt Day.

A colleague turned around and said, ‘yeah, but some will say that’s tokenism.’ And so launched a tirade about it only being ‘tokenism’ because we as an industry refuse to embrace diversity. It as though writers, producers and directors strive to create a world they feel comfortable in or one that reflects themselves.

Disability on the big screen is explored so little in Australian film and when we do, we do so in a niche, specialised or condescending way.

When we set out to make SONS & mothers we started by watching other documentaries about disability, which would invariably focus on the carer, the family who struggled, or the disability itself. What was lost to all of these films was the person at the centre of it all. We started to refer to them as wheelchair docs because they forgot about the person in the seat.

So began our focus for our film. In SONS & mothers, the documentary, we’re just flies on the wall as we watch the world of No Strings Attached Men’s Ensemble unfold. There is no voice over, no talking heads just the men and their mothers as they explore their relationships for the sake of a theatre show.

If you look closely you’ll even notice we don’t mention what disabilities anyone has unless they say so themselves. For us that’s how it should be. So often the labels we force people to wear condition us to pre-judge everyone. By going out of our way to talk about the disabilities of the Men’s Ensemble we are forgetting what they are – artists.

The fact they have a disability brings richness to their work, just like all artists who bring life experience and circumstance to their art.

Sure at its core, the motivation for SONS & mothers is purely political; let people who normally don’t have a voice, speak for themselves. The secondary concern was that form had to follow content. 85% of SONS & mothers is shot in close up to offer an intimate experience of the process. The cameras are stable and the light is sublime. We don’t draw attention to disability, nor do we spoon-feed the audience the story. We believe the cast and the audience deserve more respect.

From the very first moment Alirio Zavarce introduced the idea of a theatre show by the same name, to the day they made it to the stage at the 2012 Fringe Festival, we were there. It was a journey that started with seven men but ended with only six making it to the stage. Mental illness is a strong theme in the film and for some it won’t make for easy viewing. But what it does is start a conversation we all need to have.

We have our World Premiere this coming Sunday at the Adelaide Film Festival. It will be a momentous occasion for us as after three years in the making, we finally get to share it with our family, friends and colleagues in the gorgeous Regal Theatre (ex-Chelsea).

This screening also has AUSLAN interpreters and live audio description, with wheelchair access. This full access screening means those who may not always have the chance to share such events with family and friends can too.

Straight after the screening we will, as we have done with the documentary, hand the discussion over to disabled artists to talk about their work. This panel will be led by Kelly Vincent MLC, who some of us know is also a writer.

Joining her is A2A’s own Gaelle Mellis, from the UK Julie McNamara and Kym Mackenzie, Duncan Luke and Ryan Rowland from NSA’s Men’s Ensemble.

We sincerely hope you can join us to watch what lengths the Men’s Ensemble will go to for their craft. Also for a hearty and well-deserved discussion about why disabled arts are still niche, when let’s face it; it is where some of the most groundbreaking work is created.

Excuse the cliché but – see you at the movies!

The screening on Sunday 20 October 2013 will be Auslan interpreted and Audio Described. Book now and don’t miss out on seeing the first fully accessible film ever to be screened at the Adelaide Film Festival.