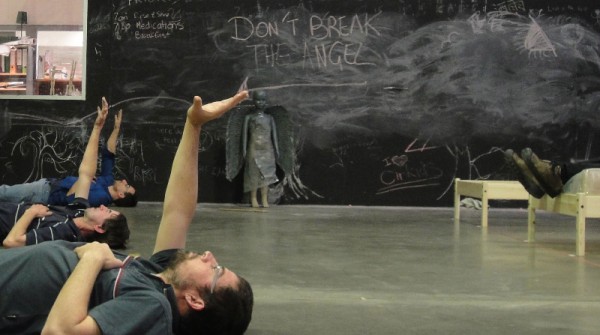 Over the course of seventy minutes, I watched carefully as a series of disparate emotions played over her face. Anticipation, intrigue, sublime fascination, bemusement, awkward discomfort, alarm, then panic, sudden laughter, amused disapproval, shock, disenchantment, re-engagement, more laughter, then concentration and reverent attention. On several occasions throughout, it appeared she had made her mind up about the show, only to have her expectations dashed, opinions refashioned and her conclusions reworked. As the lights faded, she sat back, dazed and confused, mental cogs busily turning. In the seat behind her, Writer/Director Paulo Castro cackled in glee. Jane Gronow, No Strings Attached’s Administrator, had become the first proper audience member to experience The Angel Project, just days ahead of opening night.

The last major theatrical project that No Strings Attached Theatre of Disability (NSA) undertook was the heart-warming surprise hit Sons & Mothers, conceived of by the multi-talented Alirio Zavarace and performed by seven of our theatre’s favourite sons. The show took out a string of awards in 2012, including the coveted “Best of Adelaide Fringe.” Many audience members left in tears, so touched were they by the performance. The Angel Project features four of the same “Sons” plus two guest actors, and Jane might well have expected this show to follow in a similar, feel-good vein. The Angel Project, however, is very definitely a different animal.

Portuguese Writer/Director Paulo Castro is well known in the industry for courting controversy in his shows. The forbidden and the taboo are less like theatrical barriers to Paulo than they are like red flags to a bull. That the volatile setting for the show is a psychiatric institution — not the cozy modern confines of a wealthy first world hospital, but the bare, hostile malaise of a destitute asylum — is no accident. Paulo Castro has a fascination with madness, a fascination that stems from his experience creating a show in a real psychiatric ward with real patients in his native Portugal. It was an experience that had a powerful influence on his perspective and style, and its echoes are heard once again in The Angel Project.

Very much a purist to his form, Paulo has a palpable dislike for unadventurous and formulaic theatre; he is not one to pander to commercial interests or compromise in order to accommodate an audience’s comfort zone. For this production, rather than to try and force actors to fit the deterministic mold of a pre-written script, he has drawn heavily on improvisation and spontaneous innovation during the development phase, preferring to encourage and guide the actors to expand on their natural creative instincts in service of an evolving theme. This type of development is well suited to NSA’s four actors: Ryan Rowland, Duncan Luke, Kym Mackenzie, and Josh Campton. Each has a distinctive style of performance, from which, with Paulo’s direction, their characters emerged. Two guest actors, Nick Bennett and Dave Andri, develop two other roles, building on Paulo’s vision and lending their talents and experience to the creative process. They also double as mentors to the four actors.

Watching as an assistant to the production, I have seen a rowdy camaraderie grow between the cast, technical team and director.  Their fluency in delivering lines differs from the traditional, and they surprise with moments of insight, humour, knowledge and passion of expression that reveal deeply nuanced characters. Paulo has a natural rapport with the NSA actors; he does not behave with awkward hesitations and the reserve that some people might have when engaging with disabled artists. I recall one day when Paulo expressed his anger at the reluctance of a few people to engage freely with our actors and stressed to me his determination to bring up his children with more inclusive values.

Rehearsals are full of laughter and, when direction is needed, Paulo has a knack for making his point in good humour. All four NSA actors have expressed to me at various stages how much they enjoy working with him. At the same time, Paulo is not overprotective when engaging the men with mature themes and does not ascribe to them any false innocence, nor deny them creative agency when they choose to deal with topics that may be considered socially taboo, politically incorrect or controversial. It is a refreshing attitude, albeit one which is inevitably prone to cause furore in conservative circles.

Disabled actors performing in a show featuring forcible incarceration, violence, sexuality, and sensitive religious and political issues is clearly provocative but The Angel Project challenges a number of cultural norms. It exhibits a strong distaste toward attempts to commercialise works of art and elevate them to accoutrements of the elite. It also mocks institutional attempts to domesticate our experience of life through authority and questions the pervasiveness of organised religions’ monopolies on attempts to explore life’s mysteries, even reducing them to a series of trite aphorisms or “deepities.”

Paulo makes no effort to offer audiences a convenient moral framework or rationale with which to interpret the actions of the characters. Psychosis, obsession and iniquity run rampant. That it is frequently left to the audience to discover meaning and construct narratives for themselves causes some of the action to veer toward the absurd. I have no doubt that some will ask: Is this too much? Or: is this art?

The fact is that even today, with all our knowledge and technology, a rigorous definition of art remains elusive. A dictionary will not suffice, and Googling or looking it up on Wikipedia will intrigue, but never satisfy. Much celebrated theatre has a clear narrative and logic of conception, but the flip side of such construction can be a formulaic feel or provincial, limited scope.

The Angel Project is no self-contained parable, instead, it exists on the other end of the artistic spectrum. For many, the challenge of writing a script is often in finding the theatrical value in each scene with nothing more than one’s imagination. Paulo’s experimental, improvisational style of development discovers many ideas, forms and scenes which likely would never be conceived of via the traditional route of sitting at ones writing desk in authorial solitude. It is a theatre form that deals in the ineffable, and the unknowable, the realm of irrational impulse and sudden discovery.

The more I witness of this instinctual and spontaneous style, the more I begin to appreciate its theatrical impact and the more appropriate it seems to this crazy world, in which we constantly try to reassure ourselves with knowledge and understanding, yet which is so vast and so complex that the window through which we view cause and effect, more often than not, becomes opaque. And when that happens we are lost, lost like these poor patients, wandering the countless mapless corridors of new experience, guided by nothing more than raw instinct and desire.

JD Allen worked as Assistant to the Director on No Strings Attached’s recent creative development of The Angel Project.