Attending the Access2Arts International Day of People With Disability soiree was a real breath of fresh air – literally.

The spectacular rooftop garden venue above the Access2Arts office had beautiful views and a light breeze (and lots of people praying for the rain to hold off!).

But, to be perfectly honest, after the first few minutes, I forgot all about the gorgeous venue in favour of the event itself. I’ve been to many events for December 3 over the years, almost all of them involving speeches and inspirational presentations by and about disabled people who have achieved something or been a role model or some other admirable feat. I do love hearing about other people’s lives, although sometimes it can get to a point of overload at this time of year.

The thing that I enjoyed most about the A2A event was not (just) that the one speech went for under 60 seconds. Or that the space was full of disabled people leading artistic and interesting lives. (Although both of those things were supercool all by themselves). But the best thing was that the event was so relaxed that I had the opportunity to hang out (to the tunes of DJ TR!P, no less) with the artists and arts workers who A2A works for without stopping for scheduled inspirational speeches.

Among my highlights of the evening, I got to chat to a dancer I’ve admired for ages, a performer who’s off overseas this week on a professional adventure, an audio describer who’s about to go to the UK on a British Council award tour and lots of other people doing stuff I’d never heard of before.

Two of the people I got chatting to were telling me all about new software available for DJs who are vision impaired (a whole new world for me, as I grew up in a house with two deaf parents and wasn’t aware that the radio in the car played music until I was about 12).

I had a great night and left feeling inspired by art and artists looking forward to a whole new year of creativity and imagination. Bring on 2014!

Amber is a professional Auslan interpreter and also runs a video production and public relations company specialising in disability and Deaf accessible communications. 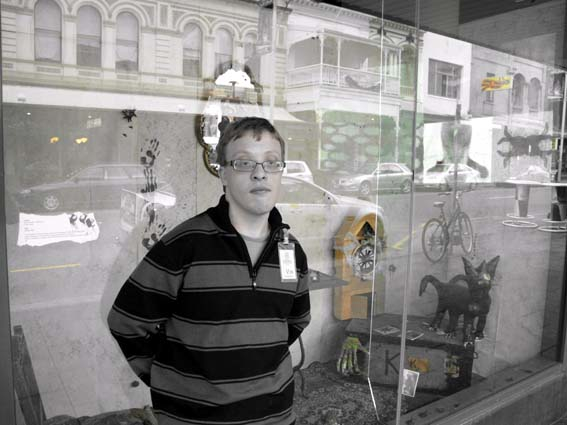 The bi-annual Oska Bright Film Festival in the UK, features the work of learning disabled artists both from the UK and from international entrants.

The festival ran between the 17-19 November, with the award ceremony taking place on the evening of 19 November, at which Jane Mote from Channel 8 Television presented James with the award for Best Special Effects for his film, Eye Movie.

The festival featured films from all around the world, including from Australia, Canada, Germany, France and all over the UK, in various categories such as ‘Young people’s Films’, ‘Films that Make us Laugh’, and ‘Films About People’. Each film entered into the festival had to be short and include learning disabled artists in the film-making process. The works were innovative, striking and quirky, and only six awards were given to the most extraordinary short films. The illuminated awards, made by artist Andy Kee, will be greatly treasured by those who won.

James represented Tutti and the SitDownShutup&Watch film and new media committee at the event, accompanied by his parents Felicity and Ross Kurtze and the Chair of the SitDownShutup&Watch committee, Lee Witczak. ‘Eye Movie’ was made with the support of the Richard Llewellyn Trust and supported by Tutti staff including Matt Goodluck, Pavlos Soteriou, Patricia Wozniak and Pat Rix.

Look out for a blog post from James on his return from the UK!

Today on International Day of People with Disability, Access2Arts’ want to share Spasticus Autisticus by Ian Dury as an informal anthem for the day.

“The term ‘anthem’ denotes a song in which the words affirm a collective identity, usually expressing attachment to a nation, institution, or cause,” says Gaelle Mellis, Access2Arts Creative.

Ian Dury’s deliberately provocative Spasticus Autisticus was written in 1981 for the International Year of Disabled Persons. It was considered hostile by the Spastic Society, banned by the BBC despite having been written by a disabled person. Spasticus Autisticus is both a battle cry (a direct reference to Spartacus) and an appeal for understanding:

‘Hello to you out there in normal land. You may not comprehend my tale or understand!’

Spasticus Autisticus remains the highest profile and most controversially direct intervention from a major pop artist within disability culture, and although the song doesn’t speak for all people with disability, it has become an anthem for some.

According to Ian Dury, who was disabled by polio as a child, he wrote Spasticus Autisticus as a protest against what he saw as the patronising International Year of Disabled Persons in 1981

“1981 was the year of the disabled, which meant 1982 everyone was going to be all right. I thought, that’s a load of ‘bollo’, so I wrote a song. I obviously knew there was a risk that I was going to alienate a lot people and they were going to get the hump with me, what’s this f*****n’, you know, spazo doing squeaking? Well, I wasn’t moaning. I was actually doing the opposite of moaning. I was yelling,” said Dury.

The song once banned by the BBC was featured in Graeae Theater Company‘s 2010 production Reasons to Be Cheerful  and was superbly reclaimed at the 2012 Paralympic opening ceremony.

The anthem was also used a call to arms, a stirring, provocative and uplifting finale to Gaelle Mellis’ and Vitalstatistix’s 2012 production Take Up Thy Bed And Walk.

Big thanks to Gaelle, Vitalstatistix, the creatives, cast of Take Up Thy Bed and Walk, and all the other Deaf and disabled women who responded to a global call for contributions.

Today on this International Day of People with Disability, Access2Arts remembers Ian Dury (who died on March 27, 2000) and his legacy – an anthem for disabled people around the world.

Ian Dury is best known as the British rocker who wrote the 1978 song Hit Me with Your Rhythm Stick, as well as Spasticus Autisticus, now one of the most controversial anti-charity songs in history. Lyrics such as “I dribble when I nibble/ And I quibble when I scribble” led to the song being banned on the BBC.

Perhaps the most memorable example of Dury’s engagement with disability politics came in 1981, the International Year of the Disabled. This was a turning point in the history of the disability movement, with disabled activists walking out of Rehabilitation International to form Disabled People’s International.