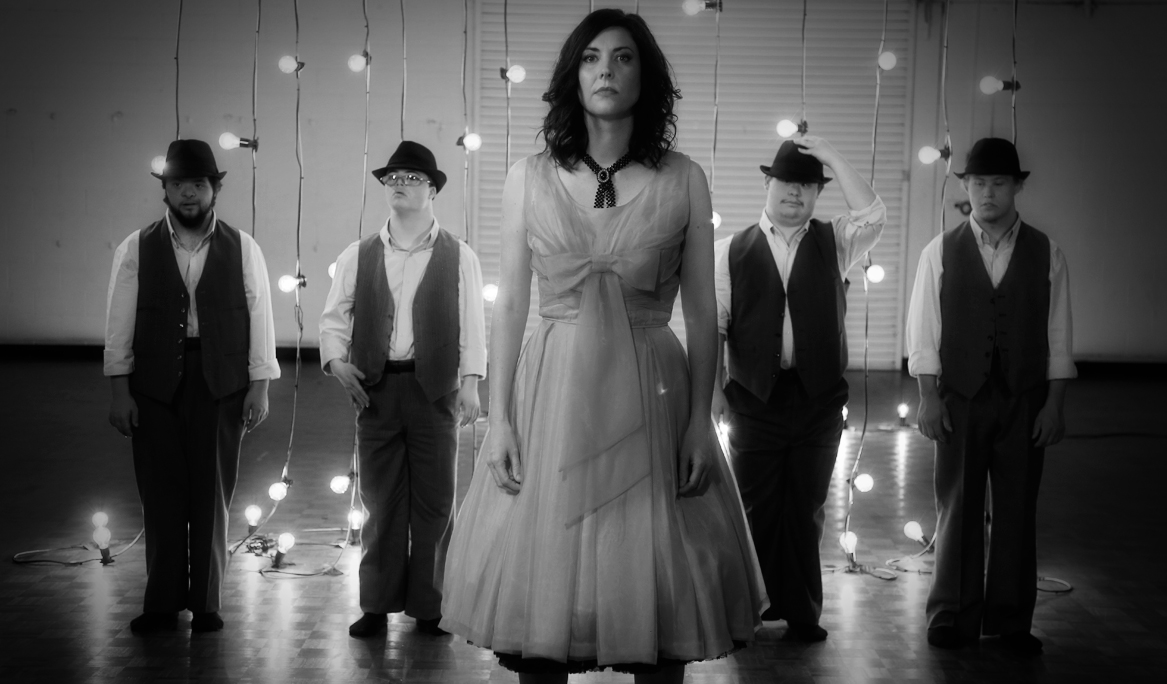 One day in September 2013 four dancers from Restless Dance Theater stepped into new roles as stars of the latest video clip for Adelaide folk-rock band The Audreys.

Performers Josh Campton, Lorcan Hopper, Michael Hodyl, Chris Dyke joined The Audreys Taasha Coates and Tristan Goodall to appear in the filming of the video clip for the song Baby, Are You There.

“It was great to work with the Audreys.” said Josh Campton, one of the dancers. ” As a dancer, me and my friends had lots of fun and I loved being involved and also seeing how a music video clip is made. I would love to do something like this again.”

Filming was held in Restless’ Sturt Street Studio over a weekend in late September 2013. Befor the weekend filming, Michelle Ryan, Restless Dance Theatre’s Artistic Director worked with the performers on the choreography, developing individual signature moves, working with hats, flirting and having fun dancing. Michelle also worked on the choreography through the filming day.

For dancer Chris Dyke being in the clip was his dream dance job, loving every minute of filming with The Audreys.

The filming was supported by a Quick Response grant from the Richard Llewellyn Arts and Disability grant program which enabled the dancers to receive payment for participating in the filming.

For The Audreys Taasha Coates, “It was an absolute joy working with the talented folks from Restless Dance Theatre. We are so pleased they agreed to the collaboration. The dancers’ passionate, honest and cheeky approach to music and movement was a delight, and hopefully for viewers it will be a much welcomed antidote to the slick, over-sexualised dance videos that seem to have become the norm.”

Restless performer Lorcan Hopper summed up the experience saying, “It was different from anything I’ve done before! I really liked the experience. I enjoyed saying the words “Baby are you there?” to the camera. I liked running and sliding with the boys to the camera. I can’t wait to see the music video and I’d love to make another one.”

Baby, Are You There is being released as the second single off  The Audreys’ fourth studio album, ‘Til My Tears Roll Away released on 14 March 2014)

Artist Chelle Destafano, a local resident of Port Noarlunga for the last 14 years, captures the town’s character in an exhibition of dazzling new work that opens at The Arts Centre, Port Noarlunga on 8 May 2014.

“I’m a visual artist working predominately in watercolour as well as in ink and wash with some pencil”, explains Chelle.  “I love depicting both from imagination and photos, old buildings both abandoned and preserved types, antiques, pets, people and anything that inspires my mind at the time. My upcoming exhibition Port Noarlunga – My Home town depicts the explorations of the town; each shop, eatery, and jetty. My work examines their characters and the detail within them as the inside of each place holds a story of the past and present.

Since moving to Adelaide 15 years ago Chelle adopted Port Noarlunga as her new home saying, “I enjoy regular meals at the best cafe, and walks along the jetty. Port Noarlunga has been my home.”

In addition to work in watercolour, ink and wash and pencil, Chelle works with a range of mediums, “I have worked and still work with acrylics and sometimes abstract, and my arts practice is very diverse.

I studied BA of Visual Arts and Applied Design between 2001 and 2006, graduating with major in painting and drawing. I love to illustrate for books as well as create my own art books and soon will be having my first art book published hopefully later this year or early 2015. My website where you can view the diverse range of my art is at www.chelledestefano.com”

Port Noarlunga – My Home is on at The Arts Centre, 22 Gawler Street, Port Noarlunga from 8 May to 4 June 2014. Check out further details at the Events page of the website. Who knew that Access2Arts and one of the fastest growing social media platforms on the planet have so much in common?

Twitter’s mission is to give everyone the power to create and share ideas and information instantly, without barriers.

Access2Arts is committed to inclusion and diversity, working with artists, audiences and organisations towards creating the conditions for the full participation of people with disability in the world of arts and culture (the only barriers Access2Arts will accept are safety barriers).

There are some very strong parallel values there and as if that’s not enough both Twitter and Access2Arts love Katie Keys tweeting one #tinylittlepoem every day. And after I attended Katie’s #140characters workshop series, presented by Access2Arts, now I’m also in love with her.

Working on site in Adelaide’s ultra modern City Library in early-March of 2014, Katie met with a group of creative disabled people over a week in order to teach the fundamentals of creating and tweeting tiny little poems. A tweet has one basic form; it must be complete within 140 characters. This includes punctuation and spaces between words. There are many forms for poetry, including the ‘short form poem’ and the Haiku. It was fascinating to discuss as a group led by Katie the vast range of poetry and the extraordinary places where you can find poetry or poetic language.

We created group poems by each writing an original line, which was great fun and very insightful as to how we express ourselves as individuals. We worked on our own tiny little poems and listened to Katie’s story which was very inspiring. Writing a tiny little poem every day for a period of years has meant Katie’s amassed quite a volume of work.

We also delved into live-event-tweeting by attending Adelaide Writer’s Week sessions where we all had a go at tweeting what was happening while it was happening. Anyone who watches ABC TV will have noticed tweets cross the screen of shows like “The Drum”, “NX” or “Q and A” and there is often a ‘guest tweeter’ whom you can engage with via Twitter during programs like “Lateline” and “Q and A” so the idea is very mainstream, but tweeting poetry is something a little more creative than simply reporting on an event.

The best thing about the #140Character workshop (besides Katie Keys and our ‘creative-enabler’ Jude Aquilina) was the vast array of doors it opened in the mind. The workshop was valuable on many levels. It inspired and educated which also means it empowered and built the capacity of everyone attending in some way.

The discussions were broad and at times really amusing because we all know how insightful disabled people are; there were moments of hilarity along with the more subdued and circumspect moments we shared. There’s nothing quite so nourishing as a group of creative people poking and prodding at the same thing to see what will happen is there? Tiny little poems rock!

Watch out for poems told in tiny little tweets broadcast into the twitter-verse in the coming months.

The #140charcters artist in residence program was funded by Arts SA and supported by the Adelaide City Council’s Library Service and City Library.

David Jobling is a writer, actor, director and visual artist. He has been a part of the team that have produced the Spoke Word Festival and is an avid tweeter. On a warm evening on the first day of April Access2Arts threw open the doors of The Mill for the inaugural Contagion, our quarterly gathering and networking event for Deaf and disabled artists, art workers and their allies – and it was no joke.

After a short welcome by Access2Arts board member, Sandra Hoopman, the guests got down to the real reason for the event – catching up!

Over 40 new and familiar faces came together, to establish connections and renew old acquaintances. It was a chance for people to debrief on their experiences over Adelaide’s festival period – AKA Mad March – and for members of the disability and arts community to let Access2Arts know the sorts of things they would like to see as part of future Contagion events.

Ad’m Martin, one of the organisers of the event said, “The naming of the event was, in part, inspired by the hugely successful disability arts celebration, Club Contagious.”

Club Contagious, or Club C as it later became known, was initiated by passionate musician and disabled artist Tony Doyle who noticed sports and recreation, and not the arts were the common outlets for disabled people’s self-expression.

Ad’m and Kirsty Martinsen worked with Access2Arts to reimagine ‘Club C’ on a scale Access2Arts could sustain on a regular basis. Together with Access2Arts they visioned an event to support networking and sharing resources to help make Adelaide’s disability and arts sector connected and stronger.

Contagion will be held quarterly by Access2Arts so look out for our next gathering in late June and be part of the conversation.